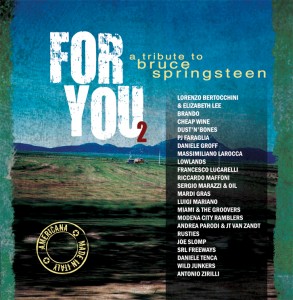 I know, I know, “Eyes on the Prize”, included here, is not a Bruce Springsteen song. It’s a traditional.
But how can you put together, in 2010, a Bruce Springsteen tribute album without thinking for only 5 minutes about the kind of crossroad that the Seeger Session (both the album and the 2006/2007 tour) has been?

While writing from Belfast a short review of the Session Band’s last show (to date), I ended up sending this note to Backstreets Magazine: “The magic of this tour was to experience a trip that took you in every musical direction, like being on the same bus with Asleep At The Wheel, Hank Williams, Cab Calloway, Pete Seeger, Bob Dylan, Little Feat and the Chieftains. How was this possible? As long as you have Springsteen behind the wheel, anything is possible.” It really is.

In 1994, when I started to cut tracks to include in the For You cd, which actually happened to be the first purposely recorded Bruce Springsteen tribute album ever (only a couple of collections of already existing cover songs had surfaced in the Eighties), Springsteen, in my eyes, was still more of a Chuck Berry than a Johnny Cash. The Ghost of Tom Joad was about to change the perception that critics and the masses had of this brilliant rock poet, who is now, needless to say, the most complete and eclectic songwriter of his generation.

While that single tribute album, which I had the honor to hand deliver a copy to the Boss himself, was intentionally a mixed bag (Italian pop, soul, alternative and rock musicians all together dealing with a versatile catalogue), the new For You cd – this time a double set – while still widely picking songs (a couple of unreleased 1970 Steel Mill gems are here, as well as 2009’s “Tomorrow Never Knows”) dives more into that Americana sound we experienced with albums like The Ghost of Tom Joad, Devils & Dust and We Shall Overcome: the Seeger Sessions. It certainly rocks with “Adam Raised a Cain”, the ghost of Elvis lingers behind every note of “Johnny Bye Bye”, but deals quite often with characters and instruments you could set in the Southwest rather than the East Coast.

This also explains why the artwork here “smells” more like the lost highways rather than the New York City backstreets (but hey, there’s a lot of New Jersey too). Just like in the lyrics to “American Land”, here you’ll find a community of (many) Italians in the company of Irish-Americans (fellow Texans JT Van Zandt and Elizabeth Lee sing for us, Chris Cacavas of Green On Red and Dream Syndicate fame plays Hammond, a girl of Irish-Italian blood happily sings about “hope and dreams”). They all share their love for Bruce Springsteen and the many sides of that sound you may call blues, rock’n’roll, country or folk.

Americana made in Italy? Why not.

All I can say is that these 25 songs is our sincere way to show, from this side of the Atlantic, our gratitude and loyalty to Bruce Springsteen for being and remaining a constant inspiration. In music and in life.