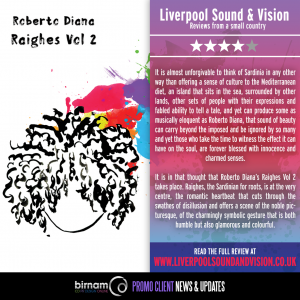 It is almost unforgivable to think of Sardinia in any other way than offering a sense of culture to the Mediterranean diet, an island that sits in the sea, surrounded by other lands, other sets of people with their expressions and fabled ability to tell a tale, and yet can produce some as musically eloquent as Roberto Diana, that sound of beauty can carry beyond the imposed and be ignored by so many and yet those who take the time to witness the effect it can have on the soul, are forever blessed with innocence and charmed senses.

It is in that thought that Roberto Diana’s Raighes Vol 2 takes place. Raighes, the Sardinian for roots, is at the very centre, the romantic heartbeat that cuts through the swathes of disillusion and offers a scene of the noble picturesque, of the charmingly symbolic gesture that is both humble but also glamorous and colourful.