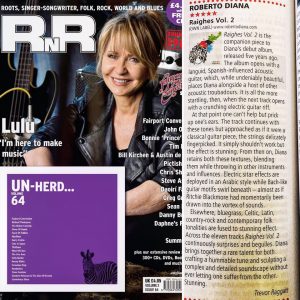 “Raighes Vol. 2 is the companion piece to Diana’s debut album, released five years ago. The album opens with a languid, Spanish-influenced acoustic guitar, which, while undeniably beautiful, places Diana alongside a host of other acoustic troubadours. It is all the more startling, then, when the next track opens with a crunching electric guitar riff.

At that point one can’t help but prick up one’s ears. The track continues with these tones but approached as if it were a classical guitar piece, the strings delicately fingerpicked. It simply shouldn’t work but the effect is stunning. rom then on, Diana retains both these textures, blending them while throwing in other instruments and influences. Electric sitar effects are deployed in an Arabic style while Bach-like guitar motifs swirl beneath – almost as if Ritchie Blackmore had momentarily been drawn into the vortex of sounds.

Elsewhere, bluegrass, Celtic, Latin, country-rock and contemporary folk tonalities are fused to stunning effect. Across the eleven tracks Raighes Vol. 2 continuously surprises and beguiles. Diana brings together a rare talent for both crafting a hummable tune and sculpting a complex and detailed soundscape without ever letting one suffer from the other. Stunning. ”