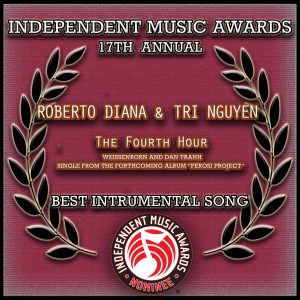 Perosi is coming back to New York!
The single ” The Fourth Hour “ has been nominated for the 17th The Independent Music Awards as ” Best Instrumental Song “.
It was on April 16, 1899 when Lorenzo Perosi in a SOLD OUT Metropolitan of New York, performed with huge success “the resurrection of Lazarus” with a choir of 250 elements together with 70 orchestra professors.
120 years later, on 21 and 22 June, his music in revisited will return to New York at the Symphony Space performing arts center of Broadway where will be announced the winners of the awards.
The winning projects will be selected by judging panels of top recording artists including Tom Waits, Lee Ann Womack, Robert Smith, Boyce Avenue, Martha Wash, Ben Lovett and Todd Rundgren, among many others; and influential press and talent buyers from the Americas, Europe and Pacific Rim.?
Also, Roberto Diana and Tri Nguyen together with Giulia Cartasegna will be this summer in concert in Italy.
July 19th, 2019 at 9:00 P.M. in Baveno (Lake Maggiore) for “Un paese a sei corde“ Festival.
|